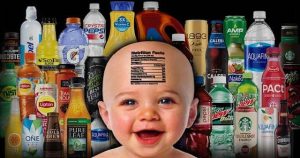 Comprehensive List Of Companies That Use This Flavor Enhancer

“Public to boycott products of major food companies that are partnering with Senomyx, a biotech company that produces artificial flavor enhancers unless the company stops using aborted fetal cell lines to test their products.”

“But when Senomyx ignored their letter, they wrote to the companies Senomyx listed on their website as “collaborators” warning them of public backlash and threatened a boycott. Food giants ,Pepsico, Kraft Foods Campbell Soup, Solae and Nestlé are the primary targets of the boycott, though Senomyx boasts other international partners on their website.

“Senomyx notes their collaborators provide them with research and development funding plus royalties on sales of products using their flavor ingredients.”

“What they do not tell the public is that they are using HEK 293 – human embryonic kidney cells are taken from an electively aborted baby to produce those receptors”…., stated Debi Vinnedge, Executive Director for Children of God for Life, a pro-life watchdog group that has been monitoring the use of aborted fetal material in medical products and cosmetics for years.”

AHLC NOTE: Here is where I firmly disagree with these “life” affirming watchdog groups. There is NO “morally” obtainable source for such things. They are being hypocritical because they are missing key information on this topic of using, harvesting sentient life forms for personal gain.

“In writing to their collaborators, it took three letters before Nestlé finally admitted the truth about their relationship with Senomyx, noting the cell line was “well established in scientific research”.

“If enough people voice their outrage and intent to boycott these consumer products, it can be highly effective in convincing Senomyx to change their methods”, she noted.”

Need proof of Senomyx use of aborted fetal cell lines?

Following is the link to the online article for their patent on sweet receptors (they filed several separate patents for each of the different taste receptors): http://www.ncbi.nlm.nih.gov/pmc/articles/PMC123709/

As it is lengthy and technical, we recommend you simply do a search in the document for HEK-293.

HEK CELL (Human Embryonic Kidney 293 cells), also often referred to as HEK 293, 293 cells, or less precisely as HEK cells are a specific cell line originally derived from human embryonic kidney cells grown in tissue culture. HEK 293 cells are very easy to grow and transfect very readily and have been widely used in cell biology research for many years. They are also used by the biotechnology industry to produce therapeutic proteins and viruses for gene therapy.

Below is a list of products that contain HEK cells.

“At this time we are formally boycotting Nestle and PepsiCo products, however many have asked us for lists of the other companies involved with Senomyx and what products are involved. Unless we know a certain product or brand name specifically, we intend to boycott all of the company’s products.”

Not part of Senomyx – Neocutis Products

This company produces anti wrinkle creams that contain cells from a 14-week gestation aborted male baby. Following is the list of the creams, but we recommend a full boycott of all Neocutis Products.

“HEK 293 cells were generated in the early 70s by transformation of cultures of normal human embryonic kidney cells with sheared adenovirus 5 DNA in Alex Van der Eb’s laboratory in Leiden, The Netherlands.”

“The human embryonic kidney cells were obtained from an aborted fetus and originally cultured by Van der Eb himself; the transformation by adenovirus was performed by Frank Graham who published his findings in the late 1970s after he left Leiden for McMaster University in Canada.”

“They are called HEK for human embryonic kidney, while the number 293 comes from Graham’s habit of numbering his experiments; the original HEK 293 cell clone was simply the product of his 293rd experiment.