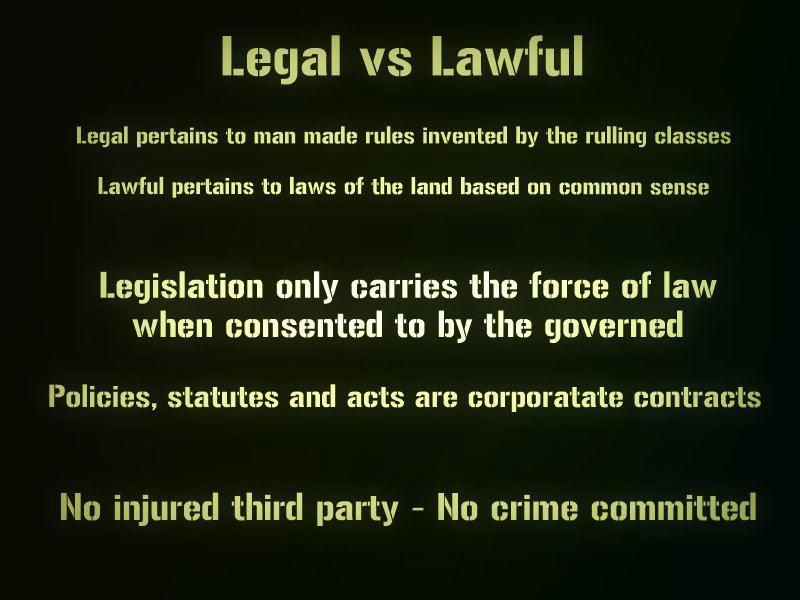 Below is an excerpt from the book Word Magic: Born Again  by Pao Chang

Legalese is the language that members of the law society use. It is an English lookalike, but many words have different meanings in order to trick you. Just remember that these people want your money and legalese is another trick they use in order to get it.

We use the word ‘understand’ often, but in legalese it means do you stand under me and everything I stand for. Once you say yes to the question, ‘do you understand’, say goodbye to some of your money or even your freedom. So, by now you should realize that they are using a foreign language, even though it looks like English, in order to control you under Admiralty Law.

You need to study their words and cross-reference them in law dictionaries in order to find out what they are saying to you. For instance, the word ‘must’ in legalese means ‘may’. So, this implies you have a choice. Next time you look at the highway code, look at the word ‘must’, they highlight it in red. But there are many words like this in legalese.

Since everyone’s circumstances are different, you need to do a lot of research of your own in order to fight these people off. They will stop at nothing in order to get at your money. Of course, you are nothing more than a slave to them. Indeed, for you to make money, you need to work hard so when they use trickery, force, legalese and coercion etc., it is them cracking their whip. In effect, they are the criminals!

For us to comprehend why legalese is a magic art of the dead, we need to study the word legal and compare it to the word lawful. Below is an excerpt from the book Word Magic: Born Again  by Pro Chang about the words blegal and lawful.

“Legal” looks more to the letter [form/appearance], and “Lawful” to the spirit [substance/content], of the law. “Legal” is more appropriate for conformity to positive rules of law; “Lawful” for accord with ethical principle. “Legal” imports rather that the forms [appearances] of law are observed, that the proceeding is correct in method, that rules prescribed have been obeyed; “Lawful” that the act is rightful in substance, that moral quality is secured. “Legal” is the antithesis of equitable, and the equivalent of constructive. Abbott’s Law Dic. 24.
Because the word legal looks to the letter of the law, it focuses on the appearance of the law, also known as the form of the law. According to Black’s Law Dictionary (Sixth Edition), form is the antithesis of substance. The word substance is defined by the same law dictionary using these exact words: “Essence; the material or essential part of a thing, as distinguished from ‘form.’ That which is essential.” The essential part of the law is the spirit of the law, and the non-essential part of the law is the letter of the law.
Focusing on the form of the law, which is the letter of the law, can lead to confusion because this part of the law deals with the appearance of the law. An appearance can be deceptive and therefore can deceive the physical eyes and mind. In legalese, the “appearance of the law” is also known as the “color of the law.” Black’s Law Dictionary (Fifth Edition) defines the word colorusing these exact words: “An appearance, semblance, or simulacrum, as distinguished from that which is real. A prima facie or apparent right. Hence, a deceptive appearance; a plausible, assumed exterior, concealing a lack of reality; a disguise or pretext” (bold emphasis added).
“In simple words, something that is lawful is of substance so it is true, and something that is legal is of form so it appears to be true” (Word Magic: Born Again, Pg. 52). The letter (appearance/form) of the law is what Satan uses to cast spells on people to confuse their minds and destroy their souls. This is one of the reasons that the Holy Bible says that the letter kills but the Spirit gives life.
Not that we are sufficient of ourselves to think of anything as being from ourselves, but our sufficiency is from God, who also made us sufficient as ministers of the new covenant, not of the letter but of the Spirit; for the letter kills, but the Spirit gives life. (2 Corinthians 3:5–6, NKJV)
This satanic law is also known as the Law of Good and Evil. The end result of Satan’s Law is death because this satanic law creates division and destruction. Satan’s Law relies on the principle of reward and punishment concerning good and bad actions. In other words, a good action is rewarded and a bad action is punished. Satan’s Law is the current law that governs the legal system, which is why the legal system operates under the principle of reward and punishment. All man-made laws, including but not limited to statutory law, common law, civil law, canon law, and Uniform Commercial Code (U.C.C.), are created to govern a fallen world; therefore, these man-made laws operate within Satan’s kingdom.
The legal system is a powerful system for controlling people, but like all satanic systems, its power can be nullified using the Word of God.
To learn how to nullify the magic spells of the legal system, read Chapter 7 of my new book Word Magic: Born Again. This chapter is free to download and read. To download it, click on this link. If you are interested in buying the full version, visit Amazon.com or the Amazon site of your country.
Blessings,
Pao
EsotericKnowledge.me